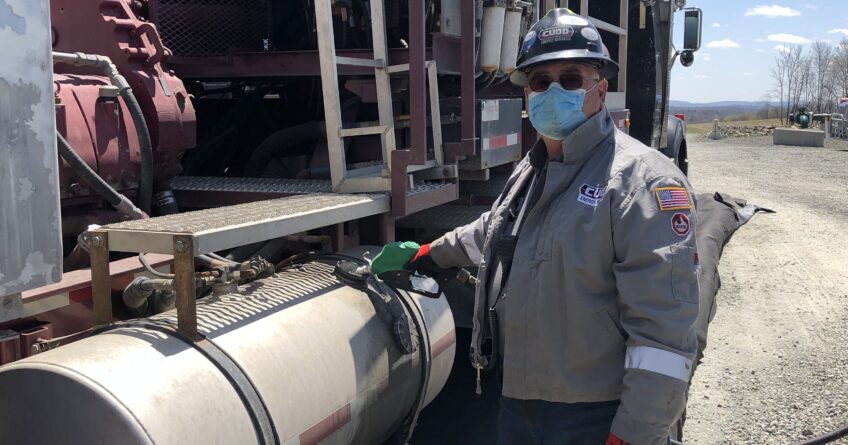 Since House Bill 732 was signed into law, Pennsylvania state legislators have been meeting with labor and energy experts to figure out the details. Their focus is on how Act 66, as it is now called, will bring investments of at least $400 million and 800 family-sustaining jobs per project to northeast Pennsylvania.

“Act 66 is a game changer for Pennsylvania because it demonstrates that there is state support for this kind of project that’s done responsibly,” said Perry Babb, chairman and acting CEO of KeyState Natural Gas Synthesis, the first company stepping up. KeyState has begun development of a 7,000 acre, gas-ready site in Clinton County where low-carbon ammonia (urea) and a diesel exhaust treatment will be manufactured, and the process of carbon capture and storage will be perfected.

Perry offered his remarks to a combined Major Policy Committee panel consisting of members of both the state House and Senate. The discussion, which involved testimony from project developers, chemical engineers, the PA Chemical Industry Council, union representatives and the Pennsylvania Manufacturers Association, was very informative.

The general takeaway from the bipartisan event is that Pennsylvania is ready to move into the future with petrochemical production. It’s time to create a market share for products that can’t be matched elsewhere due to the abundant dry gas flowing south from wells in the Marcellus shale. “It was great to hear how the new law is expected to be a catalyst for significant job growth in northeast PA and across the state,” said Rep. Tina Pickett.

“We have been criticized sometimes for pushing money out the front door too fast,” said Sen. Lisa Baker. “The difference in this legislation is that the promised investment and job levels are a central part in making the program work.” Natural gas development is a significant part of the economy of both Wyoming and Susquehanna Counties. “These opportunities come along all too infrequently,” she said of adding value to the natural gas before it has an opportunity to leave the state.

According to Perry, nearly $130-billion has been invested in petrochemical production along the Gulf coast and in central Texas and Oklahoma. The $6 million Shell cracker plant under construction in Beaver County is a significant step in a new direction. “It’s Pennsylvania’s turn to create major long-term jobs and economic development,” Perry asserted.

“As Pennsylvania’s economy is slowly recovering and additional economic solutions are being sought,” Aaron remarked. “This tax credit allows the Commonwealth to once again operate as a manufacturing hub for industrial exports.” Legislators and developers are also hoping for a site in the greater Wilkes-Barre area.