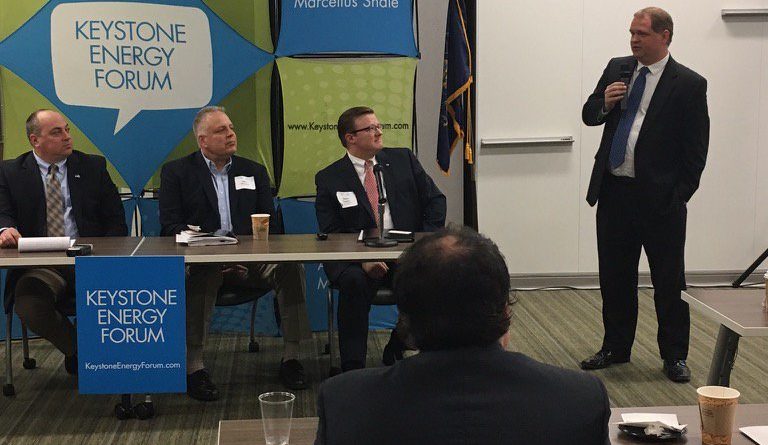 The following is an article recapping the Think About Energy/Shale Summit event in Westmoreland County and appear in the Pittsburgh Tribune-Review. You can also check Twitter under #ThinkAboutEnergy for tweets from the event.

Construction of an ethane cracker plant in Beaver County could lead to a “renaissance” of manufacturing in Southwestern Pennsylvania, especially in the plastics and chemical sectors, officials said Thursday at a shale conference at Westmoreland County Community College.

“We’re part of a revolution here,” said Mike Storms, director of operations for engineered products at the Elliott Group in Jeannette.

The Elliott Group is building the turbines and compressors for the Beaver County facility and is bidding on a second cracker plant planned for Belmont County, Ohio, Storms said.

“This is the first major U.S. petrochemical complex to be built outside the Gulf Coast region in 20 years,” he told the Westmoreland County Shale Summit.

Participants expressed optimism about those prospects but skepticism about state government’s ability to foster growth.

“It’s a tremendously exciting time, but it isn’t going to happen on its own,” said David Taylor, president of the Pennsylvania Manufacturers’ Association.

The Elliott Group, which employs 1,200 people in Westmoreland County, is building six large compressors and three large steam turbines for the Shell cracker plant. Storms said the contract represents 40,000 man-hours, not including 15,000 to 20,000 hours of engineering labor.

The Jeannette company also has submitted a bid to build five compressors and three steam turbines for the PTT Global Chemical cracker plant in Belmont County — one of three regional cracker plants that are in the planning stages.

Such facilities are used to process, or “crack,” natural gas liquids — ethane, butane, propane — for use in making plastics and other products. The Beaver County plant will use ethane from the Marcellus shale to produce up to 3.2 billion pounds of ethylene a year, Storms said.

Taylor said the result, once the plant begins production in 2020-21, could be a manufacturing boon for the region.

“Businesses have an actual economic reason to locate close to the source of the feedstock. It’s a competitive advantage,” he said.

The plant will mean 6,000 construction jobs and 600 permanent jobs, as well as the potential for growth, Taylor said.

“With the ethane in the Marcellus shale, there is enough of a capacity for four more plants of that scale. Beaver County represents only 20 percent of the potential,” he said.

Those jobs will include 300 to 400 large equipment operators attached to the International Union of Operating Engineers, including 200 crane operators, said Steven Columbus, administrative manager of the IUOE’s training center in New Alexandria.

“It’s going to be tremendous work,” Columbus said. “It looks like a pretty good run for us in the near future.”

Sunoco Logistics community liaison Chris Koop said the Mariner East 2 pipeline will be built one section at a time and will create local jobs. The 306-mile natural gas pipeline, 36 miles of which will traverse Westmoreland County, received its final two permits from the state in February.

“What this project represents … is that their head is hitting their own pillow at night,” Koop said. “That’s an incredibly valuable thing — to be working on a project in your own backyard.”