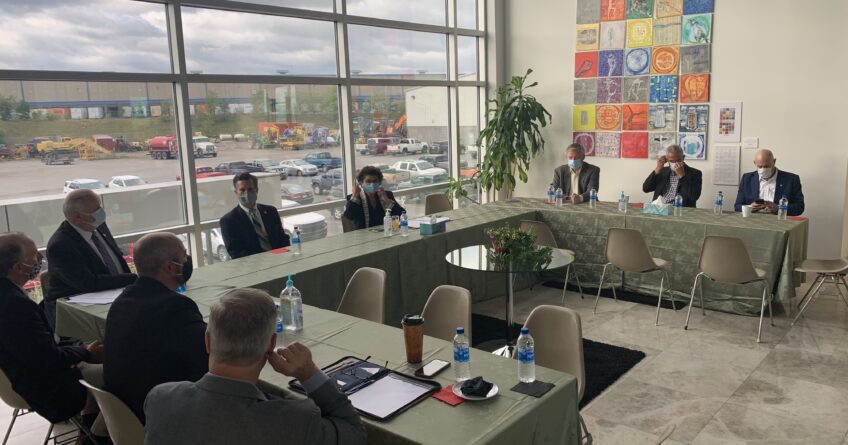 On October 8, we were proud to be part of another roundtable discussion when Jovita Carranza, administrator of the federal Small Business Administration (SBA), visited Linde Corporation in Pittston. Carranza served for three years as U.S. Treasurer after being appointed by President Trump and now advocates on behalf of 30 million small businesses in America. The key topic at the roundtable was the Paycheck Protection Program.

The Paycheck Protection Program (PPP) was offered by the SBA at the onset of the pandemic to address its related economic challenges. Carranza has been following up with businesses like Linde who took advantage of the loan to ensure that the funds were used as they were intended.

For those who were fully compliant, the SBA was strongly considering loan forgiveness. After the meeting, which was also attended by Rep. Dan Meuser (PA-09) and Rep. Fred Keller (PA-12), participants were given a tour of the Linde workshop by company president Scott Linde. Carranza was impressed by the number of employees who have been with Linde for decades and the strong partnerships Linde and others have forged with leaders in the natural gas industry.

In addition to fabricating valves and other parts for pipeline construction, Linde provides electrical, plumbing and septic services across northeast Pennsylvania. Needless to say, that made Linde an “essential” business at a time when others were forced to shut down. With economic recovery as uncertain as revenue streams, the PPP provided Linde and other companies in attendance needed assurances.

“Visiting with the employees has been essential to me, especially at family-owned businesses,” Carranza said to reporters. “It was quite enlightening to learn how the Paycheck Protection Program allowed them to continue.”

While the PPP could be used to cover a variety of expenses, the funds received by Linde went directly to payroll, Scott explained. “We’ve heard that it’s forgivable, but it’s not forgiven yet,” he stated, expressing optimism that the SBA would decide in the company’s favor. “I know that we used it correctly.”

Later that day, the SBA did announce a streamlined forgiveness process for borrowers of $50,000 or less. In a statement released the next day, Congressmen Keller commended the president and Jovita Carranza and hailed their efforts as “a huge victory for small businesses and the millions of American families fighting to sustain their livelihoods.” Keller also encouraged Congress to move swiftly on a second round of PPP, noting that another $138 billion has already been approved.