DALLAS, Pa. (May 24, 2017) – Borton-Lawson, Cabot Oil & Gas Corporation, UGI Energy Services, UGI Utilities, and Williams, in conjunction with ACT for America and the Back Mountain Chamber of Commerce, hosted a “Think About Energy” Briefing today at Misericordia University. 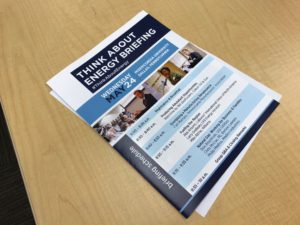 The briefing was the 11th in a statewide series now entering its fourth year. The latest northeast Pennsylvania session drew nearly a hundred attendees seeking information about the current state of Pennsylvania’s shale gas revolution and what to look for during the second half of 2017. The session’s themes included Pennsylvania’s continued escalating natural gas production, natural gas pricing and pipeline build out, as well as the industry’s impact on jobs and career opportunities.

“Cabot is thrilled to continue to bring the ‘Think About Energy’ Briefing series to new communities,” said desRosiers. “As one of the state’s foremost natural gas producers, these briefings are vital for Cabot to help businesses understand the vast opportunities that coincide with Pennsylvania’s ascension to its current ranking as the country’s second highest natural gas producing state.”

“Building new pipelines to move Pennsylvania’s natural gas is a serious need for the region’s natural gas producers and consumers,” said Amorós. “As these new pipeline projects proceed, highly-skilled LiUNA workers will ensure they are built safely and responsibly.”

New pipeline projects advancing in Pennsylvania include the Atlantic Sunrise and PennEast, both of which were profiled at today’s Briefing.

“Atlantic Sunrise represents a private investment of nearly $3 billion to expand Pennsylvania’s energy infrastructure, spur economic growth and put thousands of Pennsylvanians to work”, said Atchie. “After three years of unprecedented regulatory and public review, it is time to build this pipeline.”

“Eastern Pennsylvania and New Jersey families and businesses continue to be susceptible to natural gas price spikes,” explained Godlasky. “In fact, had the PennEast Pipeline been in service during the 2013-14 winter, Pennsylvania and New Jersey residents could have saved nearly $900 million on their energy bills. Those anticipated cost savings are closer to becoming reality — last month PennEast received a positive Final Environmental Impact Statement from the Federal Energy Regulatory Commission (FERC). PennEast is hopeful that this summer it will receive a Certificate from FERC.” 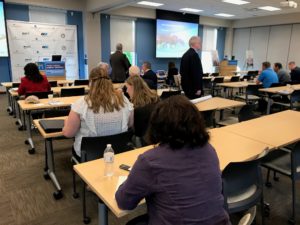 “Throughout the Commonwealth’s history, Pennsylvania manufacturers have gained a competitive edge thanks to the state’s rich resources,” said Marrara. “Today, the shale gas era is in full throttle and the confidence of manufacturers is higher than ever before. To maintain that confidence, we must continue supporting safe and responsible production, building pipelines from the wellhead and within utilities’ service territory, and helping businesses understand how they can put natural gas to work.”

Marrara discussed how manufacturers, large and small, use natural gas in their operations.

Today’s “Think About Energy” Briefing is the continuation of a four-year series that brings together Pennsylvania’s natural gas producers, “midstream” companies, utilities and users to discuss the many economic and environmental opportunities afforded by Pennsylvania’s abundant natural gas reserves. The series examines the latest industry developments and trends from the wellhead to homeowners’ meters.