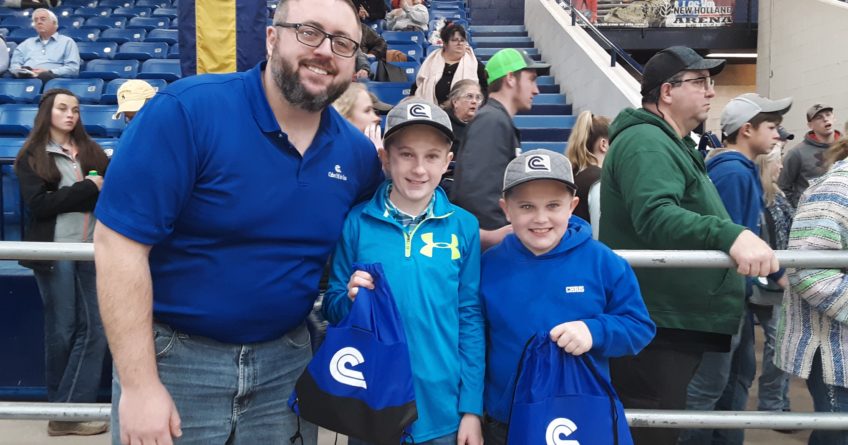 The climax of the Pennsylvania Farm Show for many 4-H members is the Junior Livestock Auction, held after the youths have had an opportunity to show the wide array of farm animals they have taken to Harrisburg. It is the culmination of a year of planning, purchasing, and raising one or more piglets, lambs, kids or calves as a project.

The auction is conducted by the Pennsylvania Farm Show Scholarship Foundation and attracts a large number of corporate sponsors who participate in the bidding. Among them again this year was Cabot Oil & Gas Corporation.

“We take great pride in rewarding these efforts by bidding on and purchasing these animals, with the proceeds from the sale supporting youth scholarships and other 4-H initiatives.”

On January 7, Chelsea Empet of New Milford and Andrew Kowalewski of Montrose were on desRosiers’ radar as he settled in for the program, which begins with the distribution of scholarships to teens engaged in ag-related studies. Local winners that morning included Tyler Peterson of Tunkhannock and Emily Supancik of New Milford.

Cabot purchased one of Tyler’s pigs at the Farm Show in 2016 and, in 2019 bought market hogs raised by Emily’s sisters, Katelyn and Jamie. The criteria varies but, for the most part, those animals that place in the top half of their categories are eligible for the sale.

More than 400 animals were paraded through the arena for sale this year, including lambs raised in Susquehanna County by Andrew and Chelsea. Andrew was up first, beaming with pride as he braced his lamb and the bids started flying. Cabot garnered the winning bid for Andrew’s lamb at $850.

“I am honored that Cabot purchased my lamb,” Andrew remarked. “It was great that a local company supported Susquehanna County 4-H’rs at the Farm Show.”

“We appreciate that they took the time to be in Harrisburg to support the kids,” Andrew’s mother, Michelle Kowalewski concurred. Andrew is a member of the Born to Show 4-H Club.

A few hours later, Chelsea got her turn at center stage. As the bidding built into a fever pitch, Chelsea’s lamb fetched an impressive $1,200, with Cabot again being the top bidder. Chelsea was one of sixth youths showing sheep as a member of the North Jackson 4-H Club at the Farm Show.

“I was excited to make the sale, since it’s my first year showing at the Farm Show,” Chelsea said afterward. “I was proud of Peaches for doing so well, and I was happy that Cabot bought her.”

Cabot has also helped 4-H clubs in Susquehanna County through financial support of the Harford Fair, where livestock barns have been upgraded to make them more attractive to the public and a more suitable environment for youths to keep and show animals. Cabot also purchases animals during the fair’s livestock auction.

“Many of our employees and vendors have participated in 4-H or have family members who are active in this program,” desRosiers stated. “Our participation helps to ensure that 4-H programs in our communities and across the Commonwealth continue for generations.”

Join Cabot for Lunch at Susquehanna County Ag Day
What Would a Ban on Fracking Mean?