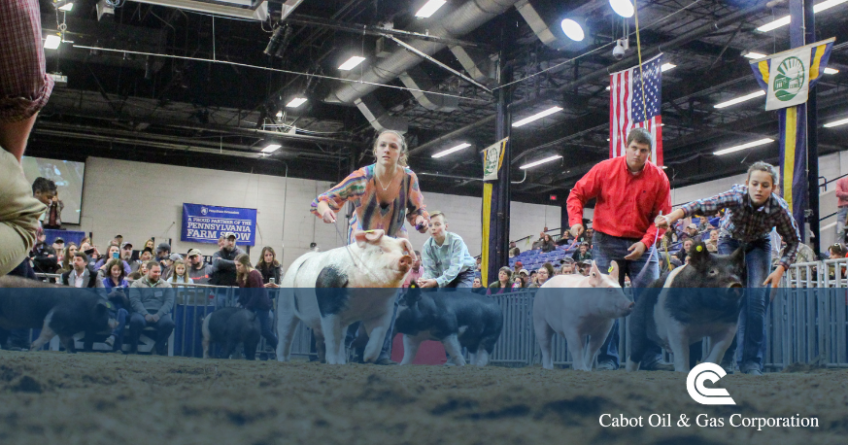 Susquehanna County 4-H members enjoy a lot of support from the community. At this year’s Pennsylvania Farm Show, local youths found representatives from Cabot Oil & Gas ready and waiting at the auction block once again to purchase pigs. They also found a friend in PA State Rep. Jonathan Fritz, who was there to congratulate them for their successes, which included scholarship wins.

Penn State junior Jamie Supancik, who was also interviewed by Fritz for his Facebook page, has been involved with 4-H for the past 10 years. For the Supanciks, 4-H has become a family affair, with her father, Robert, leading the way, and her sister, Katelyn, following in their footsteps.

Blue Ridge High School junior Kayleen Conklin was also led to 4-H by the family members who preceded her, but it was Jamie who encouraged her participation in the Farm Show. She maintains her involvement with 4-H “because of the large variety of projects available and because of the many lessons I continue to learn through it,” Kayleen explained.

Blue Ridge High School senior Tom Gudykunst was drawn to 4-H when a friend needed some help with his heifers at the Harford Fair. Tom showed dairy cows for a few years before moving on to livestock. “Raising pigs has taught me about hard work and dedication,” he related. “I have a better work ethic because of 4-H.”

“Family farming and natural gas development have a strong relationship and continue to help support Pennsylvania’s economy,” said George Stark, Cabot’s director of external affairs. “Cabot has a wonderful relationship with local farmers, many of which are landowners that have children who participate in the Farm Show and auction each year.”

Jamie has shown rabbits, lambs, and both dairy cattle and market steers, but it is pigs that have helped to earn money for her college tuition. “Cabot Oil & Gas has purchased my market hogs almost every year that I have gone to the farm show,” explained Jamie, who is studying Early Childhood Education. “It has helped me tremendously to pay for school.”

“This was my second Farm Show, and I was really excited that Cabot bought my market hog,” said Tom, who is in a dual enrollment program that allows him to finish high school while also earning college credits at the Lackawanna College School of Petroleum & Natural Gas. He also puts his Farm Show earnings toward tuition.

In addition to those shown by Tom and Jamie, Cabot bought hogs from Kayleen and Katelyn Supancik.

“Not only does their support allow me to continue to participate in livestock shows, they are helping me to prepare for a successful future,” Kayleen maintains.

This year’s Farm Show was bittersweet for Jamie, as she is “aging out” of 4-H. Her focus will now shift to completing her education so she can become a pre-K or kindergarten teacher. She also wants to become a 4-H leader. “This will give me an opportunity to stay involved with a program I love so dearly,” Jamie remarked.

Katelyn Supancik, a sophomore at Mountain View High School, looks forward to a number of years yet as a 4-H member. She currently uses the money she earns on her pigs to buy more animals and feed. She noted that Cabot’s involvement with 4-H extends well beyond bidding for pigs.

Cabot gives a scholarship to a 4-H member annually, of which her sister, Jamie, was a recipient this year and contributes to the “building fund” for the construction of a new barn at the Harford fairgrounds.

“The building project allows for there to be safer facilities for the animals and exhibitors,” Jamie stated. Katelyn appreciates the visits at the fair by Cabot managers and employees who stop to talk with them and ask questions about their animals.

“As a rural youth, I see Cabot helping 4-H and the farming community in general,” said Kayleen, who will prepare for medical school after her graduation from high school. “Not only is Cabot helping out the individual showman in this case, they are supporting the individual’s whole farm.”

“It’s important to support the farmers with which we work so closely and aid in the success of the next generation,” Stark maintained.

Tom said he benefits as well from Cabot’s support and involvement with the natural gas curriculum at Lackawanna College. “I am learning about the industry and companies in the area,” he related. “I hope that when I graduate that I can be employed by a company like Cabot that gives so much back to others.”

Meanwhile, the memories of their successful involvement at the Farm Show that still have Tom, Jamie, Katelyn and Kayleen smiling.

“Cabot Oil & Gas went the extra mile to ensure that local youngsters were rewarded with substantial bids for their livestock,” noted Rep. Jonathan Fritz, who attended the livestock auction for the first time. “It made my day and theirs too.”